Fly a nice smooth, straight line upwind and well past yourself toward the end of the field. Then pull into a medium size half loop immediately followed by a half roll. This is known as an Immelmann turn, which is one of the first fighter maneuvers, and this should place you directly above your previous position but now facing downwind. From this higher altitude continue straight flight downwind to the opposite end of the field. Perform a half roll immediately followed by a half loop. This is called a Split-S, which is another fighter turn, and now you should be back on the same line where you originally started.

For most pilots, there may have been some drift of the aircraft, and the main reason for this is a lack of your wings being level. If, while doing either loop, the plane veered off line then your wings were not level. Most pilots fly with their inside wing (the wing closest to you) down because of the perspective of being much lower than the plane. This will also change at different altitudes and different attitudes. The plane will present differently in loops and inverted flight as well. Try looking for the outside wing when you fly to increase your frame of reference – you should be able to see the outside wing tip during the entire straight flight sequence. Make sure you are not being fooled into looking at the inside wing tip.

The wind may also affect your ability to hold a line. Many airplanes will point themselves into the wind but you will have to control it using your rudder and ailerons. During looping maneuvers, you will need to use your rudder and ailerons to turn the plane into the wind and maintain the correct track. It will take practice to judge how much extra power and correction you will need to hold the line. Continue to practice and see how many “conveyer belt” circuits you can complete while keeping the plane at the same distance and without veering off to the left/right during the half loops. 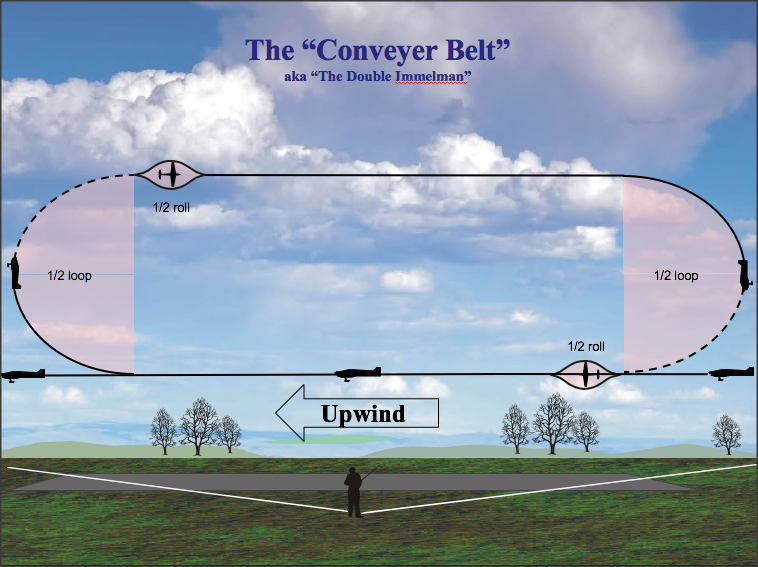